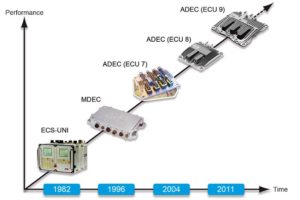 Governors control the speed, or frequency in Hz, of the power output by sensing the speed of the engine and controlling the amount of fuel and air required to maintain the horsepower required to turn the crankshaft and generator at a constant RPM. Typically, most diesel generator sets in the US generate electricity at 60 Hz and require a constant 1,800 RPM engine speed to provide clean electric power.

Electronic isochronous governors use speed sensing and microprocessors to control the engine speed in applications from simple speed control in a single genset operation to load sharing of multiple generator sets in parallel applications.

Curtis Engine can also retrofit older generators that have a mechanical governor
with electronic conversion kits and replacement parts.